Our story starts way back, when Mia took a stand….

Jamille Jones also known as Mia Jones began her philanthropy activities while in high school in 2006. Mia started the group Black Alliance Club. The organization created black  culture awareness and set out to fight back against the negative associations wildly known for  black culture. She wanted her peers to be more interested in who those that looked like her are instead of how the world portrayed them. Having grown up the only black family in her  neighborhood and mostly the only black student in her class by the time high school came she  has already endured many levels of racism, inequality and unfavorable circumstances that led to  the passion to make a change.

Jamille aka Mia started small conversations, marches events and advocated for change any way  she knew how. She taught herself about local policy and began to understand how politics played  a huge part in the circumstances that surrounded her community. The horrible activities that  plagued the black community accumulated lots of need for action and as always within her spirit  she took no time to go out and set out a way to contribute to making a difference. Black Lives  Matter Greene County chapter in Springfield Mo was born in 2015 and existed until 2017 when  Jamille decided she had other ideas that were a bit different than her peers on how to unite,  excite and get equality for minority and marginalized citizens while also including her very  supportive majority white peers in her location. She wanted to be directly involved in getting her  own ideas out into the world to see if her own visions could make a huge impact. She created the  slogan United We Stand and Organization Name United Community Change and decided to  ponder on how to make it useful. She took the remainder of that year to bring in her son Superior  into the world as she dedicated herself to ensuring the children she bore had a resource they  could depend on in this world that targeted their specific needs and challenges.

Jamille ran for Recorder of Deeds in the year 2018 from the inspiration of a community  leader Dan Decarlo. He was impressed with her speech from March For Our Lives event held at  the square and told her about the upcoming races that would be happening. She took his direction  and met many people. For her it was an experience that really opened her eyes about how much  she truly did not know and those items that are truly not provided to minority and disadvantaged  communities. Out of this she catapulted the concept of United Community change. She engaged  in speaking events on behalf of her community and did as much she could to put out the new  vibe she wanted to portray through the organization. Without many resources Jamille moved  very slowly yet carefully ensured the right people came in at the right time to support the logo  and mission of United Community Change. Eventually after much canvasing in the community,  she would finally decide what the organization represented and the activities that would assist to  make all the visions she had come to life for equality in her community.

Year 2019 was an amazing year for United Community Change. George Floyd incident  triggered. Jamille again participated in assisting to advocate in the community about the  injustices and pioneered events led by the new Black Lives Matter organization while also highly  introducing United Community Change as a second option to improving the lives of minority  and disadvantaged people. 2020 was plagued with the COVID-19 pandemic and halted many  plans for many organizations surrounding the community. However due to the amount of uphill  battle between minorities the police and injustice going on in the nation Juneteenth was the last  thing she wanted to be muted. In under a week with much pressure from the environment, and  intense negative energies circulating Jamille organized the freedom walk to allow for celebration  of Freedom for black culture and the entire nation. The event held many members of the  community who contributed their time and finances to make it successful. City landmarks were  visited and voting power was the highlight of the day. Fun activities were offered as well as some amazing guest speakers. Juneteenth was a success, and it gathered the interest of many  individuals who were eager to be apart of the vision and world changes she set out to  accomplish.

Excited Jamille began to take the organization into a more organized and professional  recognizable Non- profit brand. Through many discussions and meetings, she gathered  individuals from all types of diverse and professional backgrounds to become what was to become the true United  Community Change aside form just herself. A website was created and the very first board  members were chosen.

Now the community is able to not only experience the vision God placed  in Mia’s heart for her community and many communities around the nation as the organization  expands, but they also get to experience the entire community and the unified solutions that  come out of working together to get a common goal accomplished.

United Community Change was developed through much experience, pain, passion and  excitement. We are so happy you have decided to be apart of what is now and what is to come of  this organization. We know you are qualified to help us shape and direct the best way to find  equality, inclusion, and equity in communities across the nation.

United Community Change Is Here To Empower The People! 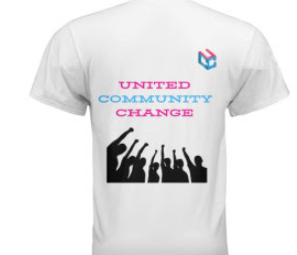 COME WORK WITH US